On Saturday, twelve members of The Parallel Case of St. Louis met to discuss "Silver Blaze."  Rob, Srini, Adam, Michael, Paul and his son Andrew, Elaine, Stacey, and Jenn and Frank Callahan were there to welcome new members, Ann and Bob Schmidt.  Before we got started with discussion of this month's story, we had our usual book giveaways and news.

The sixth season of Elementary will start on April 30, with 21 episodes. 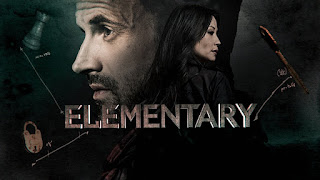 Holmes, Doyle and Friends will be in Dayton, Ohio next weekend.

From Gillette to Brett V will be in Bloomington, Indiana on October 5-7.

The Baker Street Experience is the newest app for Amazon Alexa devices.

The Folio Society announced that they would be issuing a version of The Adventures and The Memoirs of Sherlock Holmes with all new illustrations.  The public was asked to vote for their favorite illustrator. 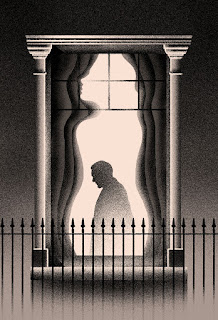 Opera Theatre of St. Louis will be hosting Opera Tastings at restaurants throughout the St. Louis area this month. 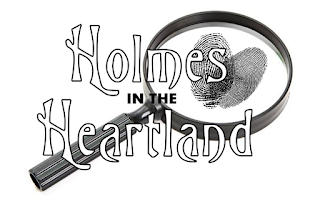 After the news, it was time to jump into this month's story, Silver Blaze.

Our story starts out with an abrupt and short scene at Baker Street.  Holmes and Watson are soon in a first-class train carriage on their way to Dartmoor to see a man about a horse and a dead man.  Before we could even get into the mystery, the group found itself in a discussion about Pullman cars and how far Holmes and Watson traveled for cases.  The question was posed, "Is Dartmoor the farthest that they travel in the Canon?" (In SILV and HOUN)  After some discussion and googling, we decided that although Dartmoor was pretty far from Baker Street, DEVI and FINA had Holmes and Watson traveling further. 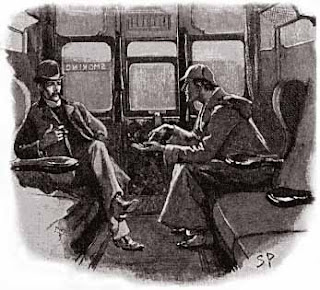 We then talked about the missing horse, Silver Blaze.  Most of the folks in the room were unfamiliar with the betting odds that Holmes recites to Watson.  Elaine explained the odds to us, which led to Adam telling us the fact that horses run races in different directions in England and America.

We considered how some characters and groups are mentioned in different stories, but are never major players, such as gypsies, Lord Backwater, and the Duke of Balmoral in this story.  And another appearance in this story that will still be seen for years and years afterwards is Holmes' ear-flapped travelling cap!

The suspect in this case is Fitzroy Simpson, and Stacey was quick to point out that Fitzroy is a terrible name because it means "illegitimate son of the king."  Not really something to brag about.  We also agreed that Simpson's behavior on the moor towards John Straker's wife was flat out creepy. 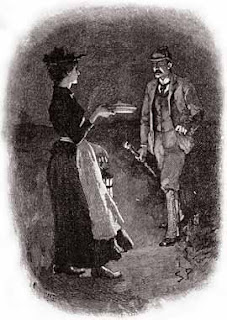 The stable boy on guard had been drugged with opium in his curried mutton.  Michael wondered if said mutton might have come from one of the lame sheep in the pasture.  Ann, a knitter, argued that lame sheep could still grow wool, so they would've still been useful.

Speaking of opium, Michael and Srini discussed the analysis that would have been used at this time to discover the opium in the stable boy's dinner.

Once Holmes and Watson reach Dartmoor, Holmes is interested in what was in the dead man, John Straker's, pockets and is then off to look at the scene of the crime.  Frank shared his view that Holmes should have at least looked at Straker's body.  He said that Holmes and Watson should have been able to tell if the deadly blow to Straker's head had come from Simpson's walking stick, or if it was shaped like something else (like a horseshoe). 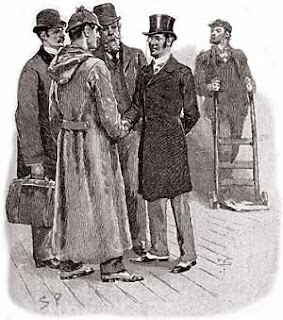 We discussed the dressmaker's receipt and the cataract knife found in Straker's pocket, although the more squeamish people in the group were NOT interested in discussing the finer points of Victorian cataract surgery.

It was also noted that buying a dress for a woman was a ploy that was used twice in this story.  Simpson offers a new dress to Straker's wife led to him being a suspect for murder.  And Straker's receipt for the dress he bought his mistress played a major part in Holmes solving the mystery.

Holmes asks for Watson's opinion more than usual throughout this story.  Watson's discovery of a second set of horse tracks also saved Holmes quite a bit of time in tracking down the missing racehorse. 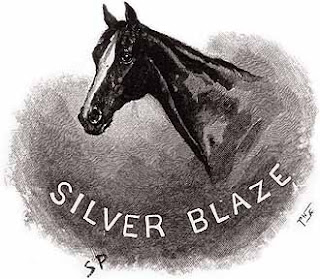 Once Holmes has found the missing horse, he leaves for London with one of the most famous exchanges in the Canon:

We spent a few minutes talking about dogs in the Canon, how Holmes seems to really understand dogs, and what ever happened to Watson's bull pup.  Andrew made the observation that this dog got famous among Sherlockians for doing nothing.

Dartmoor is described in a pleasant way in this story, with Doyle telling us that the air is "clean."  But when most Sherlockians hear the word Dartmoor, HOUN is usually the first thing that comes to mind, where Doyle described the same Dartmoor air as "foul."  We considered if it was Doyle's artistic license at work here or if Dartmoor could have such a difference from day to day. 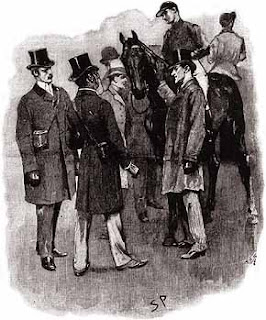 And then came the discussion about the actual horse race.  There was some debate on whether or not Holmes actually bet on the race that Silver Blaze ran in and his actions in disguising the horse.  Rob shared Doyle's own quote about this story from his autobiography: "I have, for example, never been a racing man...   My ignorance cries aloud to heaven.  I read an excellent and very damaging criticism of the story in some sporting paper written clearly by a man who did know, in which he explained the exacg penalties which would have come upon everyone concerned if they had acted as I described.  Half would have bee in jail and the other half warned off the turf forever.  However, I have never been nervous about details, and one must be masterful sometimes."

That wrapped up a fun and insightful talk on Silver Blaze.  Our next meeting will be on May 12 to discuss The Adventure of the Cardboard Box.  Come at once if convenient! 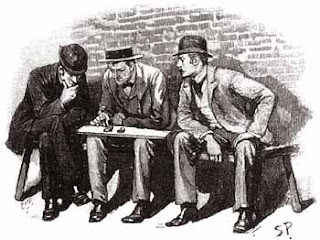 Posted by Parallel Case of St. Louis at 8:42 PM No comments: