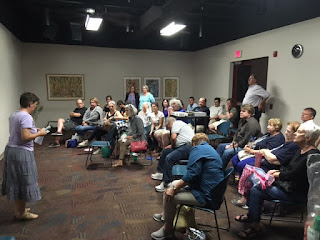 On Saturday night, The Parallel Case of St. Louis revived our irregular movie nights.  As you can see in the picture above, we had quite a turnout.  Over 30 people joined us for a double feature of "Without a Clue" and "The Adventures of Sherlock Holmes' Smarter Brother."

Our own group made up a good number of the attendees, providing many great snacks for all present.  (I wish I had taken a picture of the snack spread that took up two tables!)  Many of the other attendees came from the publicity we received from Cinema St. Louis and the Monday Movie Club. 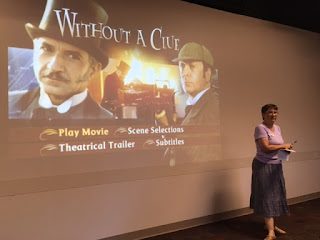 We should all be very grateful to Nellie, whom orchestrated this whole event.  Nellie scheduled the room at the St. Louis Ethical Society, created the flyer for the event, coordinated publicity with Cinema St. Louis, set up the room and the DVD player and projector, and served as emcee for the evening.  We may never get Nellie's limits!

Many of us had seen one or both of the films on DVD before this weekend, but we all agreed that seeing the movies with an appreciative crowd was a great experience and made for a very fun evening.  Michael Caine's portrayal of Sherlock Holmes was especially enjoyed by the crowd. 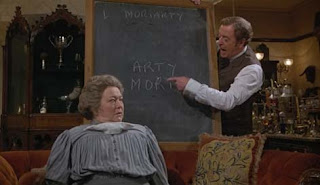 Our next meeting is on September 9, at the usual location, the Schafly Branch of the St. Louis Public Library.  We will meet to discuss "The Adventure of the Noble Bachelor."  And you can bet discussion of our successful movie night will be at the top of the docket, as well.

After an unofficial poll, it's safe to bet that movie nights will be back again, but our group will have to discuss how often we would like to host them.  Please join us if you'd like a say in the matter, or just for a great and friendly discussion of a great canonical story and current happenings in the world of Sherlockiana! 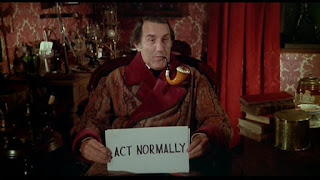 Posted by Parallel Case of St. Louis at 4:47 PM No comments:

The Parallel Case met on July 8 to discuss "The Adventure of the Engineer's Thumb."  We had a great turnout and discussion!

As usual, we started off with general Sherlockian news.

First off, if you haven't heard yet, we are having a Sherlock Holmes movie night on July 29!  RSVP to parallelcasestl@gmail.com if you'd like to join us. 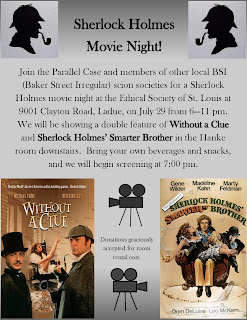 Speaking of film and movies, the group talked about the BBC America Sherlock Holmes marathon that would be airing the day after the meeting.  Seasons one and two of BBC's Sherlock Holmes and Robert Downey Jr.'s first Sherlock Holmes movie were on tap.  Also, the renewal of CBS's Elementary was discussed and its start date.

The Insight Theater of St. Louis will be performing "Baskerville: A Sherlock Holmes Mystery" in October.  You can order your tickets here.

The Noble Bachelors of St. Louis are sponsoring a Silver Blaze race at Fairmount Park in August.

Rob has a new Sherlockian book, The Criminal Mastermind of Baker Street coming out in November and has started a blog, Interesting Though Elementary with weekly posts. 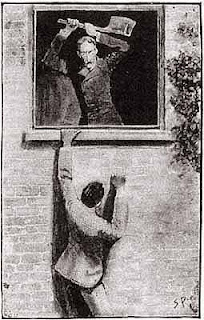 And then it was time for the story!  A quick thank you to Tassy, who took notes on the group discussion this month.

The group wondered about Hatherly.  He admits that no one would miss him if he disappeared, goes to a mysterious meeting in the dead of night with a near stranger and when he senses a crime has been committed, brought it up with the presumed criminal!  An odd man, indeed.

Proper medical care of a thumb amputation and wound dressing were discussed, as well as the Paget drawing above.  After a demonstration for the group on how Hatherly's thumb would have been cut off, it was decided that the illustration did not match up with the hand/thumb position in the story.

The group felt that Holmes wasn't his best in this case and did very little detection or deduction, really only recognizing the significance of the horse being fresh rather than sweaty.  And he failed to find the fleeing criminals: an odd-looking German, his wife and his large British friend driving in a carriage with, what we presume, was a big load of coining materials.

The story wasn't a favorite by anyone in the room, and people wondered what the support for it in About Sixty would be.  (You'll have to buy your own copy of the book to find out!)

The similarities between this story and The Greek Interpreter were explored.

A thought was brought up that maybe this was an example of moralistic storytelling on Watson's part.  Was this a cautionary tale about the sin of greed?

Before ending, the group talked about the high prevalence of counterfeiting rings, especially coining operations in 19th century England.

Our next meeting will be on September 9 at 1:00.  Our next story will be The Adventure of the Noble Bachelor.  If convenient, come at once! 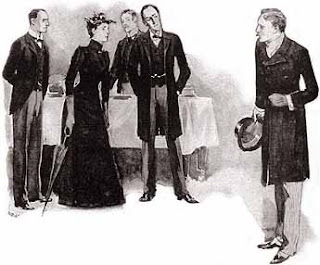 Posted by Parallel Case of St. Louis at 7:59 PM No comments: