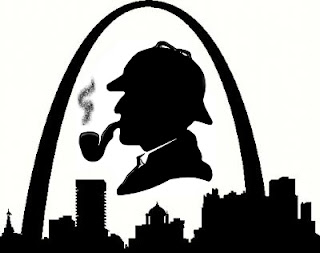 We rounded up 2018 with our biggest turnout of the year!  16 folks met on Saturday to talk about Sherlockian news and discuss The Gloria Scott.  We started the meeting off by scheduling the 2019 meetings:

News for the month:

Joe and Heather recapped the events from The Gillette to Brett conference that was held in Indiana last month. 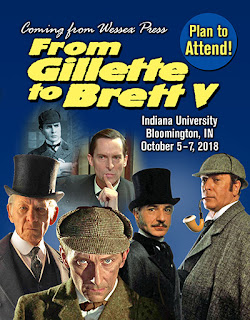 The Harpooners of the Sea Unicorn will be meeting this Friday to discuss The Cardboard Box.  Their annual observance of The Blue Carbuncle will be on December 21.

Dark Places, Wicked Companions and Strange Experiences will be on August 9-11 in Minneapolis, Minnesota

Last Saturday would have been Jeremy Brett's 85th birthday. 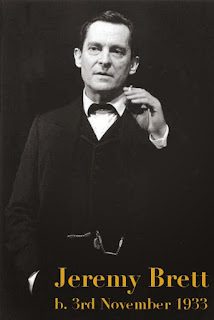 Holmes and Watson opens on December 25.

Dear Holmes is a new mail subscription service that allows you to solve monthly mysteries with clues mailed to you by Sherlock Holmes and his associates. 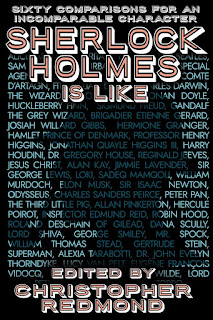 The monthly giveaways were passed around, and then it was time for our discussion!

The Adventure of the Gloria Scott is the fifth story collected in The Memoirs of Sherlock Holmes, and was first published in The Strand magazine in 1893.

The story starts off with Holmes telling Watson, "I have some papers here."  Quite an understatement knowing how much Watson loves to hear about Holmes' early life. 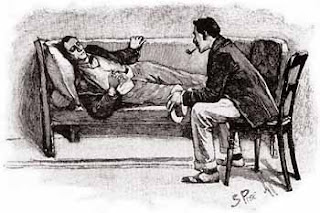 Holmes hands Watson a note about hen pheasants that makes no sense, and then tells him that this note "was the first in which I was engaged."  He's just toying with Watson now!

We talked about what would've prompted Holmes to bring this story up on that day.  Elaine proposed that Holmes had recently received a letter from Victor Trevor, which made Holmes think to tell Watson about his first foray into detective work.

Holmes tells Watson about his days in college where he was unsociable, only participated in fencing and boxing, and was bitten by Victor Trevor's bull terrier.  Rob wondered if this was why Watson's bull terrier never made an appearance at 221B Baker Street.

Srini wondered if Victor Trevor was such a "hearty and full-blooded fellow," why was he just as friendless as Holmes?

Heather fielded all of our questions about the difference between college and university in London.

Victor invites Holmes to his father's estate over the long vacation, which would have been some time between July and October.  Once he's there, Holmes quickly sizes up Old Trevor as a man of little culture, with obvious money, is physically strong, does not read books, was well-traveled, and known as a kind and lenient justice of the peace.

Victor has talked up Holmes' deductive tricks to his father, and Old Trevor asks for a demonstration on himself.  Holmes quickly rattles off that he is in fear of an attack, was a boxer in his youth, has done digging in the past, has been to New Zealand and Japan, and someone with the initials of JA was once important to him, but is no longer so.

Maybe he wasn't so strong after all.

Srini pointed out that Holmes' deductions about New Zealand and Japan were never explained when Old Trevor came to.

But Old Trevor does deliver a line that launches the career of the world's greatest detective: "It seems to me that all the detectives of fact and fancy would be children in your hands.  That's your line of life, sir, and you may take the word of a man who has seen something of the world."

Old Trevor is now nervous around Holmes, so Holmes decides to cut his visit short.  But not before Old Trevor is visited by an old acquaintance by the name of Hudson. 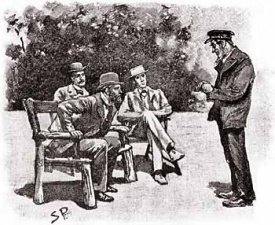 We then discussed if this Hudson was related in any way to Mrs. Hudson.  Rob pointed out that this story also contained the names Armitage and Pendegrast, that we hear again in SPEC and FIVE respectively.

We also wondered where exactly Holmes went to when he says he returned to his rooms in London.  Joe offered that it could have been is rooms at college while Elaine thought he may have settled in with brother Mycroft for a time.

Holmes soon hears from Victor that Old Trevor is dying, and Holmes' response to that was it was impossible.  It was noted that Old Trevor had recently fainted from Holmes surprising him, and Michael said that Holmes should have eliminated the impossible and simply said that this was improbable.

It turns out that Old Trevor had gone downhill since Hudson had arrived.  He was given a job as gardener, but only got drunk and harassed the maids.  He was then promoted to butler and was just as horrible at that job.  Victor put him in his place one day, and Old Trevor came to Victor to ask him to apologize to Hudson.  Victor refused to do so and asked his father for the truth about Hudson, but could not get an answer from him.

Hudson soon announced that he was leaving and going to visit Old Trevor's friend, Beddoes.  Old Trevor took a turn for the worse, and when a letter from Beddoes arrives, it was almost as if he had had a stroke. 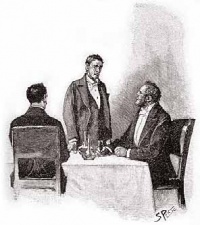 By the time that Victor and Holmes have returned to the house, Old Trevor has dies.  Holmes immediately suspects that Hudson was blackmailing Old Trevor.

Victor gives Holmes the note that had arrived, which read, "The supply of game for London is going steadily up.  Head Keeper Hudson we believe has been now told to receive all orders for fly paper and for preservation of your hen pheasant's life."

Holmes deciphers the code, reading every third word: "The game is up.  Hudson has told all.  Fly for your life." 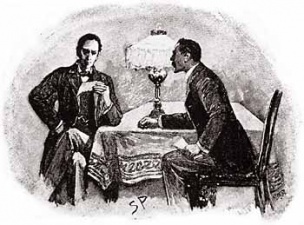 Srini pointed out that if this was such an urgent message, was there really a need for this to be a cipher?

Victor has a letter from his father, telling him the truth about Hudson and Old Trevor's previous life.  His real name was James Armitage and he was aboard the convict ship, The Gloria Scott, headed for Australia that was lost off of the west coast of Africa. 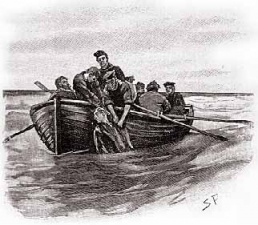 The three of them were rescued and delivered to Sydney, where Trevor and Beddoes changed their names to avoid their sentences and Trevor eventually became rich in mining.  Once he was rich, Trevor came back to England and became a justice of the peace.

Andrew, Kristen, Michael and Srini wondered why so many Australian convicts found their way back to England after being shipped out.

We debated how believable this story was, as it was written by Old Trevor, and he could have changed events to make himself look better in his son's eyes.  There was also discussion on just how bad of a person was Old Trevor. 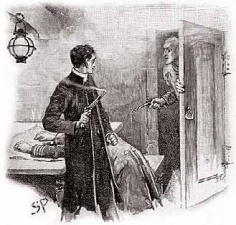 After Trevor's death, Beddoes and Hudson have disappeared.  Holmes believed that Beddoes has killed Hudson and disappeared.

Michael offered the theory that Holmes helped to orchestrate these disappearances as well as Victor's tea plantation in India for a princely sum.  Maybe Holmes was a criminal mastermind before he was a detective?

Rob wondered why Holmes would have the hen pheasant note and Victor didn't keep it for himself.  Margie argued that the note was essentially a murder weapon, and if she were Victor, she wouldn't want anything to do with it.

Michael pointed out that the lost ship trope pops up frequently in the Canon, and this wasn't the only story that contained a false clergyman.

Elaine shared Bill Cochran's thoughts on GLOR from his essay in About Sixty.

It was tossed around that if this was Holmes' first instance of detective work and he failed at it, is this why he hates blackmailers so much in his later years?

We also theorized on where Mycroft would be in his career at this time period and that led to a general discussion about the Holmes family.

Heather noted that Holmes only attending two years of college would not be proper, and we then discussed Holmes' college career.

Michael quizzed us on what types of alcohol were mentioned in GLOR.  Answer: brown sherry and port.

We then turned our conversation into introspection and discussed why we Sherlockians love to pick apart the stories and why Americans in particular seem to have a deeper fascination and bigger reaction to intellectual properties than the British.  We didn't come up with a definite answer for it, but we can all agree that whatever reason, we're glad that it brings us together every other month.

And speaking of getting together every other month, make sure to start off 2019 by joining us on January 12 for The Musgrave Ritual.  Come at once if convenient!
Posted by Parallel Case of St. Louis at 10:16 PM No comments: