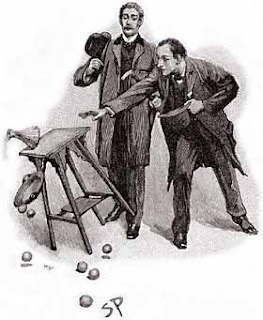 Eleven of our esteemed members gathered on March 9th to discuss “The Adventure of the Reigate Squires” (or Reigate Puzzle, if you happen to have been around when the story was published in America in 1893). Rob Nunn was out of town, so the meeting was led by Tassy Hayden.


We once again debated over Holmes and Watson, as the film won four Razzies: Worst Picture, Worst Director, Worst Supporting Actor, and Worst Prequel, Remake, Rip-Off, or Spin-Off. It should be noted that Will Ferrel was nominated for Worst Actor but lost to Donald Trump. 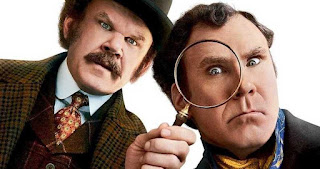 The conversation around lapel pins continues. Kristen has done some research, and there are many online outlets that can produce pins, and some that will help with designs. The next step is to choose whether we would like enamel or brushed metal. Joe brought up the point that members who have the previous design might like to have a new pin, and we discussed the possibility of a design contest. 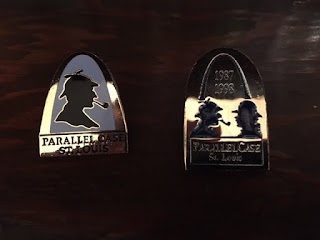 Announcements continued with reminders of several upcoming Holmesian conferences as well as meetings of nearby Scions. The annual Noble Bachelors Dinner (and the Scion’s 50th anniversary) will be held on April 20th at the Lemp Mansion, and invitations will go out soon.


Finally, The Parallel Case is now on Instagram, username @parallelcaseofstlouis. 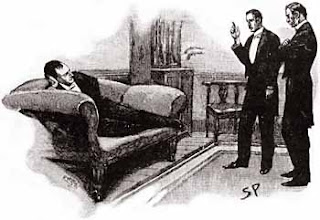 Next, we turned our attention to the story. We start with Watson retrieving Holmes from a hotel in Lyons, where he is convalescing after over-exerting himself for over two months of investigation into the Netherland-Sumatra Company, a case which has brought him international fame. Watson decides that Baker Street is not peaceful enough for Holmes’s recuperation, so the two travel to Reigate, in the Surrey countryside about 22 miles from London, to spend time with Watson’s bachelor friend, Colonel Hayter.


But mystery and adventure always seems to find our heroes, and on the night of their arrival, they hear of a curious burglary at the home of one of the two richest estates in the area. An odd assortment of objects was taken. The next morning, local Inspector Forrester arrives to ask for Holmes’s help. It appears that the other large estate, that of the Cunninghams, was targeted for burglary, and that a young coachman was killed by the fleeing criminal. Both of the men in the household, father and son, arrived on the scene shortly after the murder, and a torn piece of paper was found in the fist of the victim, which appears to solicit an appointment. 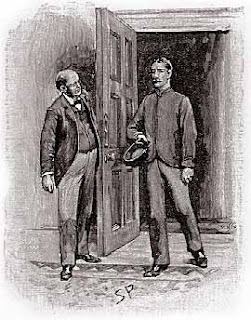 Holmes takes great interest in the paper clue, and travels to the Cunningham estate to investigate. He returns and collects Watson, Hayter, and the Inspector for a tour of the house. What follows is a display of Holmesian genius showcasing his acting and deduction as well as his skill at handling haughty criminals. He finds the rest of the torn note in the pocket of the son’s robe during a distraction he created, but is immediately set upon by the Cunningham men. Holmes demands that the men, who certainly appear guilty based on their violent actions, be arrested for murder. 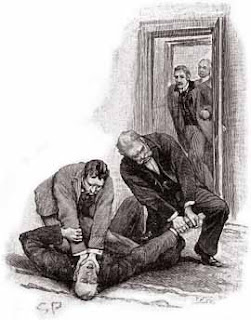 Holmes then separates from the group again, and they reassemble, with the addition of Mr. Acton, the head of the other large estate, back at Hayter’s house. Holmes then lays out several clues, including the absence of footprints of a fleeing criminal, the absence of powder burns on the body, and, of course, an analysis of the fragment of the note from the dead man’s hand. Mr. Acton confirms a motive for the Cunninghams’ attempted burglary of his home, as they are involved in a land dispute, and Holmes concludes that the coachman saw his employers in their attempt, leading him to attempt blackmail and the Cunningham son to lure and kill him.


Many exclamations over Holmes’s brilliance, ingenuity, and acting ability resound, and Holmes and Watson plan to return to London the next day. 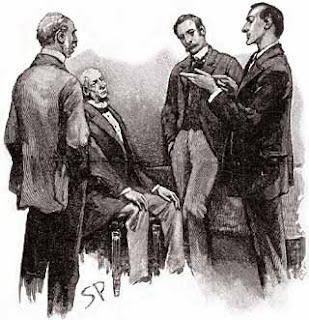 The solution to this mystery, more than any other, hinges on the analysis of handwriting. Sir Arthur Conan Doyle had an interest in graphology, and communicated with Alexander Cargill, a noted graphologist, shortly before the story was published. Cargill postulated that one could ascertain the age and relative state of health of the writer by the penmanship. Our author gave himself a challenge, writing in 1893, “I would like now to give Holmes a torn slip of a document and see how far he could reconstruct both it and the writer of it.”


We discussed the phenomenon of Sherlock Holmes fans asking Conan Doyle for help with mysteries and court cases. He was famously involved in the George Edalji case, which involved animal mutilation and the conviction of an Indian lawyer based on questionable handwriting evidence (in 1903). Mr Edalji was eventually released from incarceration, but was not pardoned, meaning that he could not practice law. He contacted Conan Doyle in 1906, who reviewed the case and began to write articles and give lectures and likely played a large part in a new inquiry into the case and the resulting pardon. This story is discussed in Arthur and George by Julian Barnes. (Also recommended, if one has interest in Conan Doyle’s work on real life cases, was The True Crime Files of Sir Arthur Conan Doyle.) 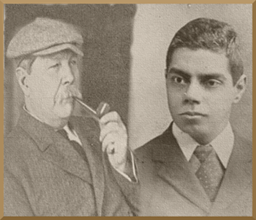 ACD included this story on a list of his twelve favorites, stating that “on the whole, Holmes himself shows perhaps the most ingenuity.” Elaine summarized the About Sixty essay by Ashley D. Polasek, who wrote that this story has a bit of all the best characteristics of other stories. In “The Reigate Squires,” we see several types of forensic analysis (footprint, powder, and handwriting), compelling clues (unconventional burglaries), an illustration of the caring relationship between Holmes and Watson, Holmes’s acting, and an action packed, told-in-the-moment denouement.

As a group, we bemoaned the absence of a film adaptation, noting Holmes’s theatrics, the mental gymnastics involved, and the physical altercation with the Cunninghams seem like they would provide quite a lot of dramatic interest.


Our next meeting will be on May 11th at 1 pm, and we will be discussing The Adventure of the Crooked Man. 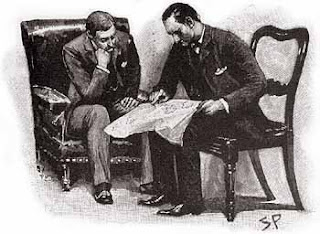 Posted by Parallel Case of St. Louis at 6:55 PM No comments: