Diogenes and Silence by Michael Waxenberg

In The Greek Interpreter, we first learn of Mycroft Holmes’ membership in the Diogenes Club. This unique club requires silence.  Sherlock Holmes says to Watson:


"There are many men in London, you know, who, some from shyness, some from misanthropy, have no wish for the company of their fellows. Yet they are not averse to comfortable chairs and the latest periodicals. It is for the convenience of these that the Diogenes Club was started, and it now contains the most unsociable and unclubable men in town. No member is permitted to take the least notice of any other one. Save in the Stranger’s Room, no talking is, under any circumstances, allowed, and three offences, if brought to the notice of the committee, render the talker liable to expulsion. My
brother was one of the founders, and I have myself found it a very soothing atmosphere." 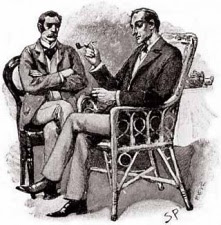 Sherlock Holmes himself is fond of comfortable chairs and the latest periodicals. He also stands accused of misanthropy. No wonder that he finds the atmosphere of the Diogenes Club very
soothing. Why is this club for theunclubbable named after Diogenes? Diogenes was a Cynic philosopher from Sinope, in Asia Minor (modern Turkey) I who lived in Athens and Corinth in the 4th century B.C.E.

He distinguished himself by living in abstinence, even living in the streets or in a "pithos" or bath tub. He rejected riches and honors I and sought virtue. Diogenes is the man made famous for searching through the streets of Athens with a lantern, looking for an honest man.

Diogenes lived about the same time as Aristotle. I am no student of philosophy, but the contrasts are obvious. While Diogenes the Cynic looked for individual virtue, Aristotle sought civic virtue, and action toward the betterment of the state and the civilization.

Sherlock Holmes met many famous and important persons of his day, and gave them much the same type of sarcastic treatment. In The Second Stain, a former Prime Minister of Great Britain attempts to give Holmes a commission for a task without disclosure of all relevant information, under the excuse of "State secrecy." Holmes then says he is too busy to handle the matter, causing the Premier to erupt in anger, initially. Holmes engages in a terrible breach of etiquette. But, was it merely a tactic to cause the Premier to open up and reveal all necessary data, or was it also an expression of a more deeply rooted cynicism toward those in power in society?

Holmes engages in sarcasm with members of the noble classes in The Priory School, A Scandal in Bohemia, The Noble Bachelor, and many other adventures. Much has been written about Holmes'
democratic, or anti-nobility politics, but I suggest that his attitude is better described as Cynicism, in the formal sense. This hypothesis is borne out by Holmes' treatment of the formal law enforcement authorities, from whom he does not try to conceal his sarcasm. Those individuals are generally not from the upper classes. But they represent part of the formal structure of society, and Holmes is in the society, but not of it.


all popular applause was always abhorrent, and nothing amused him more at the end of a successful case than to hand over the actual exposure to some orthodox official, and to listen with a mocking smile to the general chorus of misplaced congratulation.

Later, in that same adventure, after Holmes almost kills Watson and himself by inhaling the fumes of the burning poison, Watson describes the situation:


He relapsed at once into the half-humorous, half-cynical vein which was his habitual attitude to those about him. "It would be superfluous to drive us mad, my dear Watson," said he. "A candid observer would certainly declare that we were so already before we embarked upon so wild an experiment. Holmes follows the ethics of a cynic by relishing silence. Numberless times, Watson describes Holmes sitting in silence, smoking in silence, thinking in silence, doing chemical experiments in silence, or waiting and watching for some unwitting culprit in silence. Silence fits Sherlock Holmes like his dressing gown, and is part of his personality.

Holmes follows the code of a cynic by denouncing public recognition of his achievements, by living simply with self-control and a rigid abstinence, and by a rejection of materialism, class structure, formal laws, and by living with an independence of spirit seldom found in any human. If it could be said that Aristotle begat, in the philosophical sense, Alexander the Great, Napoleon, and Gladstone, then Diogenes begat Disraeli, Sherlock Holmes, Philip Marlow, and Sam Spade.

Posted by Parallel Case of St. Louis at 11:41 AM No comments: